Shopping Cart
Your Cart is Empty
Quantity:
Subtotal
Taxes
Shipping
Total
There was an error with PayPalClick here to try again

Thank you for your business!You should be receiving an order confirmation from Paypal shortly.Exit Shopping Cart

Dino De Marchi is a Barrister and Solicitor with many years experience providing legal services based in Brunswick. He is greatly involved in the community.

Newsdesk: e-conveyancing, and stamp duty changes—what they may mean for you

Changes to e-conveyancing and stamp duty are now in force. e-conveyancing is now the norm for most property conveyances. Everything from settlement, signature of transfer documents, stamping, and payment of duty will now be online.

Be aware that sales over $750,000 will require a clearance certificate from the ATO.

We sincerely hope that following initial teething problems these changes will lead to a speedier conveyancing process and prove more helpful to first home buyers.

In 2015 our Principal Dino De Marchi was given recognition for his work with the Ivanhoe RSL. He was granted an Australia Day Certificate from former Minister and Federal Member of Parliament, Jenny Macklin MP. 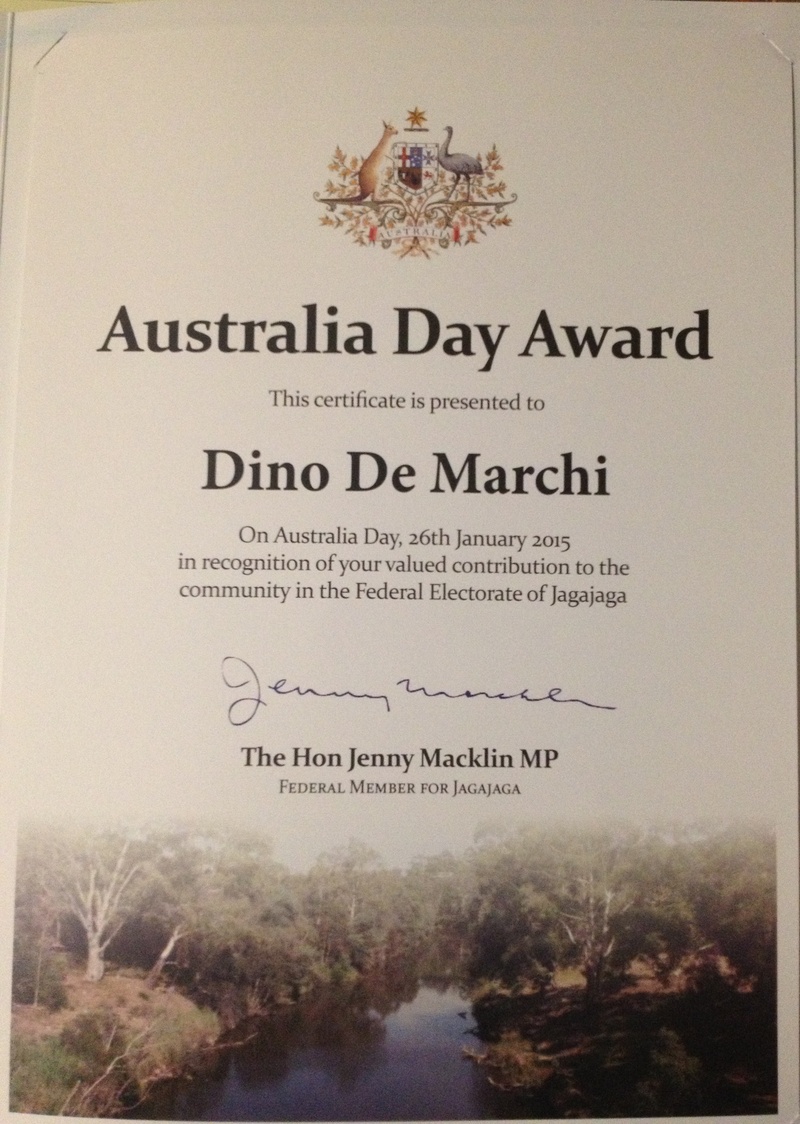 A Special rate decision supported by the Federal Court. was later overturned by the full Court.

Bromberg J. delivered his decision on the 29 July 2014. The Decision is attached:

We are pleased with our successes in this area of law.

Summers v Repatriation Commission is a more recent one; we will post the decision shortly.

Has the Federal Court Jurisdiction in Honours and Awards Decisions ?

ON THE QUESTION OF JURISDICTION

1. We submit that  there are (at least) two bases for the Federal Court’s jurisdiction in these matters: (1) the ADJR Act and (2) the Judiciary Act. The Applicant invokes both avenues, in that order of preference.

b. There are strict rules governing eligibility for awards ...

c. An applicant is able to seek review by the Federal Court on questions of law, but not on the merits ...

3. The ADJR Act provides for judicial review jurisdiction in respect of decisions of an administrative character made under an enactment.

4. The determination of the DHAAT is a “decision”, namely a decision as to eligibility for an honour or award.

5. The determination is of an “administrative character”, being the consideration of relevant facts and their relationship to fixed criteria, namely “strict rules” governing eligibility.

6. The determination is made “under an enactment”, namely the Defence Act 1903, which establishes the DHAAT.

7. As a result, the Federal Court has jurisdiction to review the legality of the DHAAT determination.

8. The above sub-section of the Judiciary Act provides for review jurisdiction, inter alia, where certiorari is sought against an “officer of the Commonwealth”.

9. Tribunal members occupy an “office”, namely the office of Members by way of appointment, with the provision of salary, to a Tribunal established under a Commonwealth Act.

10. Tribunal members are therefore “officers of the Commonwealth”.

11. Alternatively, the original determination by the Department of Veterans’ Affairs was made by an employee of the Department, being an “officer of the Commonwealth”.

12. As a result, the Federal Court has jurisdiction to review the legality of the DHAAT determination !

Age Discrimination in Voluntary Organisations: What are your Rights?

Age Discrimination in Voluntary Organisations: What are your Rights?

There are, however, exceptions that allow discrimination on a number of grounds. The general rationale for these exceptions is that they are either necessary or do some social good. The Age Discrimination Act, for example, creates exceptions for charities and religious bodies. It also creates an exception for voluntary bodies. If you are an older member of a voluntary organisation, you may have experienced some form of discrimination on the basis of age. You may have wondered, “Is it really lawful?” and “Can I do anything about it?”

That depends on a number of questions:

Is it really a “voluntary body”?

If a substantial portion of the organisation’s activities are for the purpose of making a profit, then they are not a voluntary organisation (even if you are a “volunteer” ) so they are not exempt from age discrimination on this basis.

What actions are exempt?

Even if the organisation is a voluntary body, not all of its actions are exempt from discrimination on the basis of age.

(a) admission as members, and

(b) provision of benefits, facilities and services to members.

But, what about other rules? Let’s say someone is already a member. Can there be a rule saying they cannot be appointed as an office holder within the voluntary organisation? To be more specific, what if a voluntary body institutes a rule that members over 80 cannot hold office? Whether or not this is unlawful is not immediately clear.

It might be said that to become an office holder is a “benefit”, and, as noted above, a voluntary body can discriminate on the basis of age in providing benefits. What is a “benefit”, though? Certainly, being an office holder is a responsibility. But, some “offices” come with perks – members of parliament, for example, have a long list of benefits. The matter seems to come down to whether there are tangible benefits in your particular role as office holder. Are some reimbursements for expenses incurred in fulfilling your duties as office holder enough? The bottom line at the moment is that there is no guidance from the Courts on this question.

What should you do?

If you are in this situation, it might be worthwhile making inquiries and possibly a complaint to the Australian Human Rights Commission. Of course, this suggestion is no substitute for more detailed legal advice based on your particular situation.

It was a pleasure to attend with veteran Fred Cullen OAM, President of the Ivanhoe sub branch, the recently concluded State Conference of the RSL.

If the above motions are taken up by the National executive of the RSL later in the year and pushed as important issues for legislative amendment, veterans should see an improvement in their entitlement determinations.

It is again a pleasure to advance the cause of veterans and I look forward to your comments.